Skip to content
This is the first time Razer is entering the smartphone space and they are giving you the world first 120Hz “Ultramotion”
display, the first use of Qualcomm’s QuickCharge 4+, and a great set of specs
like 8GB of RAM, 64GB of storage (further expandable via microSD), and a 4,000
mAh battery.

The Razer Phone is made out an all-aluminum CNC chassis, has
a 24-bit DAC, and it boasts two front-facing stereo speakers with Dolby Atmos
sound, each with its own amp – and they’re certified by THX (a first for a
phone). Razer claims it’s the loudest handset ever. On the flip side, there’s
no 3.5mm headset jack, although you do get a USB-C to headphone adapter in the
box. 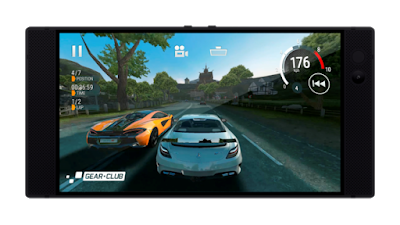 It features a screen size of  5.7″ QHD IGZO LCD with wide color gamut
and 120Hz refresh rate, twice as much as you normally get from any mobile
device other than Apple’s iPad Pro line. It’s packing an adaptive refresh
technology that syncs the GPU and the display. This is called UltraMotion and
was developed in cooperation with Qualcomm to ensure no tearing or lag even at
high frame rates. 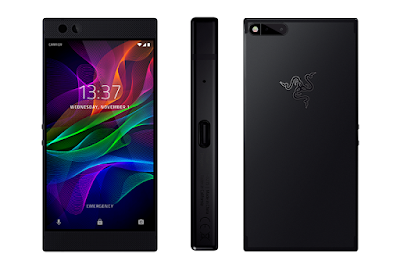 Razer  phone comes with Snapdragon 835
chipset, 8GB of RAM, and 64GB inbuilt memory.
Dual rear camera setup of a 12 MP f/1.75 main shooter and a 13 MP f/2.6 2x
fixed zoom lens, along with a dual-tone LED flash. 8MP f/2.0 snapper for
selfies. The fingerprint sensor is in the power key on the side, and the Razer
Phone runs Android 7.1.1 Nougat out of the box (with an update to Oreo coming in Q1 2018). It ships with Nova Launcher Prime Razer Edition.

It comes with a 4000mAh battery capacity and Razer said you can watch movies for
12.5 hours on its phone, listen to music for 63.5 hours, and play Hearthstone
for 7 hours straight. With support for Qualcomm QuickCharge 4.0+, the battery
charges from 0 to 85% in just one hour.

Highlight of The Spec

It will be priced at $699 and shipping begins from 17th of
November.