Skip to content
Without much doubts, you’ll all agree that Android OS is a
powerful OS that powers billions of devices all over the world. Well, there is
a new report from StatCounter, that Android has surpassed Windows as the
world’s most popular operating system for browsing the internet.
The report is based on a sample size of over 15 billion page
views per month and the mention “Internet usage” is strictly the viewing of
website pages. This report does not include app or data usage as part of the
results. 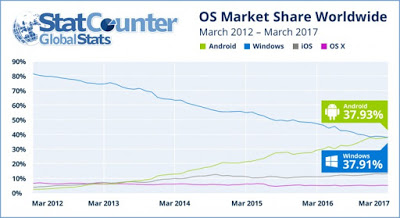 Android topped the worldwide OS internet usage market share
with 37.93% in the month of March, which put it marginally ahead of Windows at
37.91% for the first time. This position represents a major breakthrough for
Android which held just 2.4% of global internet usage five years ago.
StatCounter also called it a milestone in technology history and the end of an
era for Microsoft’s dominant OS.
The chart above shows overall internet usage market share
over the past five years. Here you can see the steady decline of Windows as the
primary internet device has inversely shifted to Android on a world-wide scale.
Source via