It seems the Nigerian business environment hasn’t been very friendly to eCommerce businesses in recent times.

In 2017, Efritin an eCommerce firm and subsidiary of Saltside Technologies, shut down its operations citing high cost of data, harsh economic conditions (possibly due to the recession at the time) and increasing operations costs in the country as its reasons for surrender.

Konga another leading eCommerce giant had to save itself through a merger with an offline retailer “Yudala” in a  $34million acquisition deal from Naspers and ASB Kinnevik by Zinox Technologies one of the strategic tech companies in the nation. This is an acquisition that obviously took a lot from its early investors. 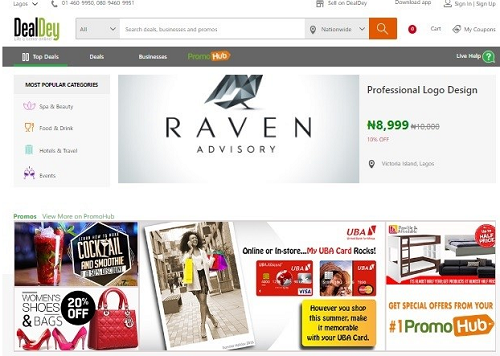 OLX, a subsidiary of Naspers also wound down in early 2018, stating on its part that it had to make a difficult but important decision by closing its operations in Nigeria, to consolidate its operations across the globe.

And now, it’s DealDey… Following one month of inactivity on its website and social media pages, it is confirmed that Nigerian daily deals platform DealDey has shut down operations.

According to a source close to the matter, the company shut down around the second week in December 2018, about the time when users last saw deals on its site and social media pages.

DealDey offices have been closed down and workers have been let go. In the past few weeks, users have been asking questions, complaining about unanswered calls and emails, and speculating on a possible shut down.

And now we are being redirected to “Promohub” that’s telling us to Feature our Promo.

No more deals on the site, it is now a mirage of itself. DealDey came into Nigeria with plenty deals way back 2011… and left with ‘no deals’… This is just too bad.