shows how a phone can be operated
completely by a finger 2cm above the screen. The phone was built with locally
available parts.

An inspiring video demo which he released online shows how a
phone can be operated completely by a finger 2cm above the screen. The phone
was built with locally available parts.
According to him, “I’m working hard on adding lots of cool
features and improvements in the lab, this is just a tip of the mountain of
innovations,” he said. 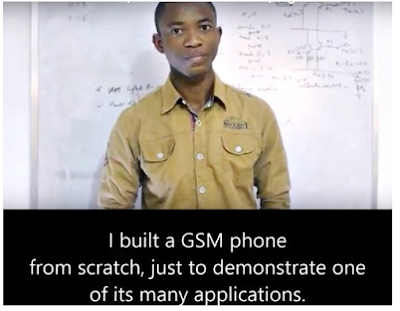 Below is what Osas wrote about his latest invention;
”Nigeria is blessed
with intellectual resources, but we’ve been mentally conditioned to tapping the
resources under our feet rather than those between our ears. Well, times have
changed, and believe it or not, within the next four years, a Nigerian made
phone will dominate the global phone market and shock the world. We’re hungry,
dogged, and strongly determined to make the memory ours, while others are still
dreaming.”
See the 6 minutes
video demo below

The second 1minute video is to the President Buhari