Its
weekend people and I think this is coming handy to all football lovers. DSTV
foresee this one coming hence they needed to make amendment sharply. DSTV took
to their page to announce that the Barclays Premier League, La Liga and UEFA
Euro 2016 are now available on two new SuperSPort channels SS11 and SS12 on
DStv Compact. Meaning if you are a subscriber on its Compact bouquet, you’ll  now be able to watch football matches from these
new channels. This is not a promo but a permanent addition to DSTV Compact
bouquet. 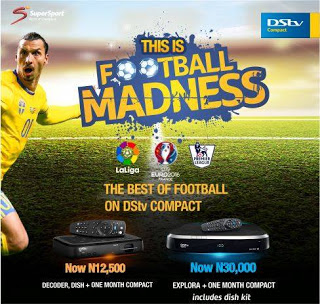 Football
lovers, time to smile but also remember that the fear of probing is the beginning
of price slash.