Skip to content
Google released its newest OS –
Android 7.0 several months ago, and many renowned smartphone brands claim they
will roll out this update very soon, among them are Huawei, Moto, and Sony.
However, only several models have got updated already.
As the first Vernee model branded as
finely-designed smartphone, Mars has won great popularity among its users and
media. 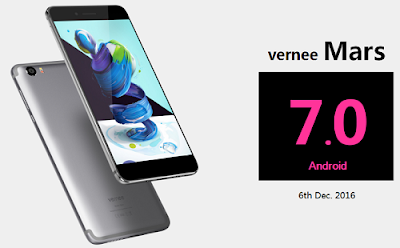 Launched in August with the
retail price of $249.99, it carries Helio P10 CPU, 5.5 inch FHD display, 4GB
RAM, 32GB ROM, 13.0MP rear camera, and 3000mAh battery. And it supports quick
charge and sports a side-mounted fingerprint sensor.
Vernee has been clinging to its motto
to keep rolling out updates for its all products, including the old ones. And
it’s among the first to push out major Google OS update as well.
It is reported that Vernee will roll
out Android 7.0 update on 6th December for Mars. This will make Mars the first
Helio P10 smartphone to get this major update.
When next you want to buy a
smartphone, get yourself something that will constantly receive updates and not
the one that you’ll need to submit prayer points before the updates surface.
Source: Vernee