K30 5G Racing Edition is the first phone to feature Qualcomm’s upgraded Snapdragon 768G chipset. The new 5G-enabled processor brings a slight performance increase over the existing Snapdragon 765 and 765G. It boosts the CPU clock speed from 2.4GHz to 2.8GHz. It also ups the performance of the Adreno 620 GPU by about 15%. 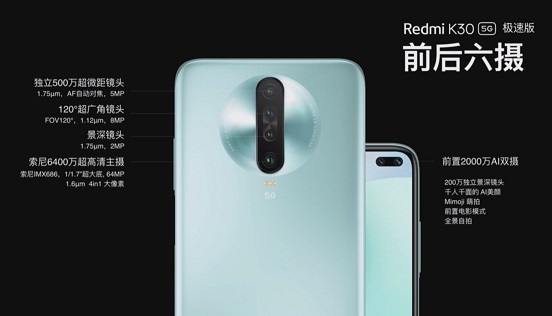 Looking at the cameras, it comes with a vertically aligned quad camera setup at the back consisting of a 64MP Sony IMX686 primary camera, an 8MP ultra-wide camera, a 5MP macro camera, and a 2MP depth-of-field sensor.

On the front, Redmi K30 Racing Edition features a 20MP selfie shooter assisted by a 2MP depth sensor, both housed within punch holes on the right corner of the screen.

The volume buttons rest on the right edge of the phone and the fingerprint sensor is integrated with the power button.

It is housed by a battery capacity of 4,500mAh with supports for 30W fast charging onboard. There’s no wireless charging on the phone.