Skip to content
This sound like good news as  slow over-the-air rollout of Android6.0 Marshmallow updates to the Nexus line started yesterday.  Not just that but google has officially taken
the responsibility of updating the Android One smartphone to Android 6.0. Though
the company hasn’t officially announced
anything about when or if these would be making the jump to Marshmallow.
But the good news is the rollout has already started, at
least for the first-generation Android One handsets such as the Micromax Canvas A1,
Karbonn Sparkle V,
and Spice Dream
Uno. Update notifications are now spotted across India, so if you haven’t
received yours, just a little bit of patience is necessary. 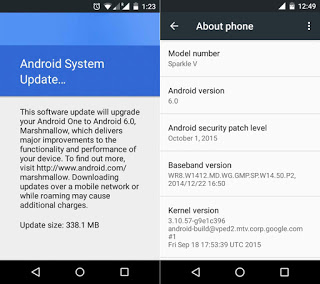 All Infinix Hot2 users in Ghana, Kenya,  Nigeria and other country running Android One
OS, get set because it will soon get to you. Make sure your phone is not rooted
(but it doesn’t stop you from getting the update).
Other Devices that will equally get the Android 6.0 Update
includes as seen in the image below
The good news is, the update is not even large but just 338MB
in size. For all the Android one smartphone, relax the update is gradually
rolling out and it will soon get to you. Kindly let us know when you’ve receive
the update.
Source

29 thoughts on “Android One Devices Are Now Getting Android 6.0 Update”