I’m a kind of guy who love devices with killer battery just like the newly annouced Doogee T6. Chinese producer announced that Doogee T6 will be launch in November and it will come with 6250mAh battery capacity. 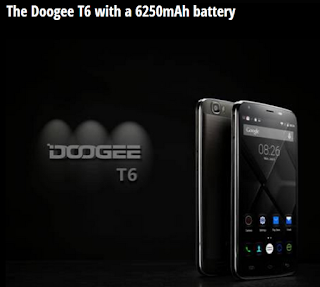 The Doogee T6 gets up to 101 hours of use between charges, according to the manufacturer. Despite the massive battery, the phone still manages to measure 9.9mm thick. While Doogee didn’t mention any specs outside of the battery, previous rumors mentioned that the T6 will contain the MediaTek MT6735 chipset, which includes a quad-core CPU and the Mali-T720 MP2 GPU. 2GB of RAM is rumored to be inside, along with 16GB of non-expandable storage. The camera combo, from back to front, is said to be 8MP/2MP.

The Doogee T6 will support 2A fast charge, and with reverse charging you will be able to use it to power up other devices.

3 thoughts on “Will You Rock This Device Doogee T6 With Incredible 6250mAh Battery?”