Skip to content
Not too long ago, Facebook launched the lighter version of
messenger app dubbed messenger lite but you won’t find some of the features
included in the standard version on the lite version. But today facebook has
decided to add one of the very important feature to messenger lite, video
chatting.
According to Facebook, video chat is a core part of
communication and so it wouldn’t make sense to be removed from Messenger, even
if we’re talking about a slimmed down version of the app.
If you are using the standard version and find it so
sluggish or consume a lot of space, you can uninstall it and download the lite
version. 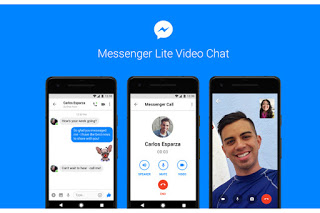 Now that Video chat has been added to messenger lite, I see
nothing holding you down from using the app. The standard messaging app weighs
about 114MB while Messenger Lite weighs under 10MB making it fast to install
and fast to start up.
Offers many core messaging capabilities, including sending
text, photos, links, as well as audio calls to people with either version of
the app.
Go to Google play store to download the updated Messenger
lite.