Skip to content
Google
has officially launched its video calling app Duo… announced during the google
i/o conference and now, it is almost ready for grab.
Duo
a simple 1-to-1 video calling app available for Android and iOS. Duo
takes the complexity out of video calling. Some of its selling points are its
simple interface, end-to-end encryption, and the fact that it works seamlessly
even with poor network connections. 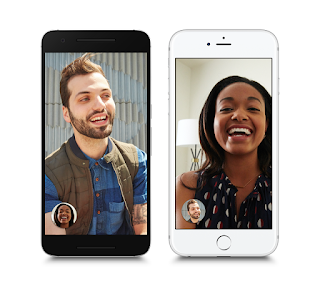 Features
>>Simple
interface
>>Fast
and reliable even with slow network
>>The
design is warm and inviting with a feature called Knock Knock. It let you see live
video of your caller before you answer.
Duo
gives more  emphasis on privacy and
security, and all Duo calls are end-to-end encrypted.
All
that is required is just your phone number and you are good to go. It has not
been rolled out yet, but will soon be rolled out to all countries few days from
now.
Check
Google Play and itunes store to pre-register.