Skip to content
Few days after officially replacing its 140-character tweet limit with a new 280-character limit, the social platform has done something
similar, but much less conspicuous.
Though many users see the new 280-character tweet limit as
an unnecessary move, and the site has been flooded with updates mocking the change
since it came into effect.
Before now, Twitter display name
could only contain 20 characters, but now you have upto 50 characters. 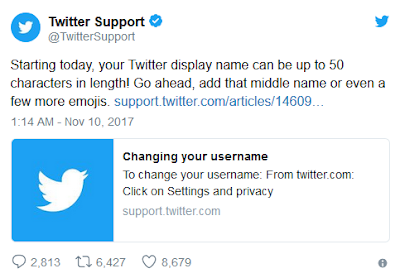 Notably, this change only applies to display names and not to the user
names. For those of you confused as to which is which, the user name is what
follows the @ symbol and is often referred to as a “handle.” That is
still, for now, blessedly limited to 15 characters. The display name, on the
other hand, is that thing people fill with emoji. Got it?

This change is sure to please all those who felt that the previous law of the
Twitter land, 20-character display names, stifled creativity, expression, and
in no way contributed to an easy-to-read experience while scanning their
respective feeds. Cough.