Skip to content
Twitter 280 character is now available for all. Twitters announced
that it is satisfied with the test it started in September that allowed some
users to double the character cap on tweets from 140 to 280.
The new character limit for most Twitter users globally is
now officially 280 characters per tweet.

During the test period, Only 5% of
tweets sent were longer than 140 characters while only 2% were over 190. Mind
you, this data was collected before the limit was changed for the vast majority
of Twitter users. 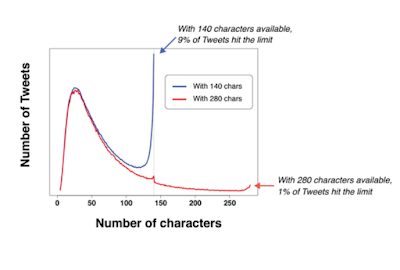 It is important to note that those writing in Japanese,
Chinese and Korean will continue to have a 140 character cap. It takes fewer
characters in those languages to say something that would take many more characters
to express in other languages.
The changes is already visible on my system and my
smartphone. If yours isn’t visible, just update your app and you are good to go.
Via: Twitter

19 thoughts on “Twitter 280 Characters is Now Available for All”