I
don’t know the demon called Rashague that entered glo admin office yesterday
hence left a lot of people in the state of Bruhaha. It is a sad news but you
just have to hear it out. Glo that has been saving life since 1900 and now has
decided to kill the lives they’ve saved.

This
is to inform you that Glo Blackberry subscription of N1000 has been discontinued
hence you won’t be able to subscribe again for that amount. A loyal reader of
this blog Frank called me this evening 24th February 2016 to notify
me after interacting with Glo official.

I
dialed *777# and this is what I found as seen in the below image. 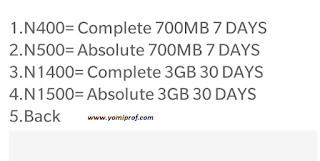 So
if you still want to continue using this same Glo plan on your android device,
then you need to go for any of the above plan.

Don’t
too worry, there is a more affordable and better Glo plan that works on all
device including iPhone and PC users. I’ll update you on that asap.

84 thoughts on “Bad New: Glo Blackberry N1,000 For 3GB Has Been Discontinued”