Skip to content
Encryption is one of the most important tools governments,
companies, and individuals have to promote safety and security in the new
digital age. But its easier said than done. Privacy is very important when it
comes to online security.  WhatsApp seems
to be one of the most secured chatting platforms. WhatsApp have been working so
hard in improving its services. WhatsApp is set to roll out end-to-end encryption
to all users. 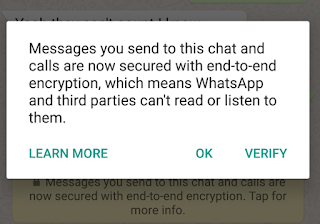 With end-to-end encryption, WhatsApp asserts that only you
and the people involved in your conversations can read your messages. No one,
not even WhatsApp, can access them in route. Each message you send is secured
with its own lock, with only you and your recipients having the key necessary
to unlock. WhatsApp then claims to delete messages from its servers after
they’ve been delivered.

According to WhatsApp, “From now
on when you and your contacts use the latest version of the app, every call you
make, and every message, photo, video, file, and voice message you send, is
end-to-end encrypted by default, including group chats.

The idea is simple: when you send
a message, the only person who can read it is the person or group chat that you
send that message to. No one can see inside that message. Not cybercriminals.
Not hackers. Not oppressive regimes. Not even us. End-to-end encryption helps
make communication via WhatsApp private – sort of like a face-to-face
conversation.” 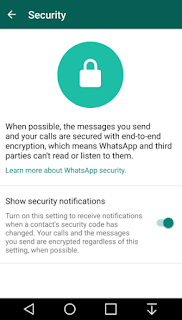 This feature comes as the result
of a server-side change, so no new update is required. You don’t even need a
friend online to try things out. Messages sent to yourself are apparently also
secured. So go ahead, talk to yourself, nobody will penalize you.

I don’t know if this update will
be available for Blackberry 10, Windows phone 7 and Symbian users since
WhatApp  had announced that they’ll  remove supports for these devices…Android OS is the way forward!

What do you think about this
update?