Skip to content
This will make you go back to your old strong rugged  Nokia brand because HMD Global, the current
manufacturer of Nokia smartphone has been dishing smartphones like flash using
the speed force. In less than a year, they’ve dished out 8 new Nokia models
into the market in which 4 are feature phones and the remaining 4 smartphones.
Just last week, we heard HMD is working on Nokia 2 with a
whooping 4000mAh battery capacity (1GB of ram, Android 7.0 out of the box, Qualcomm Snapdragon 212 processor and
it’s going to be a 5 inch phone). Look at the picture below;
Now again, a Mock-up images has appeared online portraying
the Nokia 9 according to what Nokia Power House reported.
The Nokia 9 will feature an OLED screen with minimal bezels
at the front just like the iPhone X and Samsung Galaxy Note 8, IP68
certification and may probably feature an Iris scanner.
Other rumored specs for the handset include a 13MP + 13MP
Carl Zeiss dual-camera at the back, 13MP selfie shooter, 6GB/8GB of RAM, 128GB
internal storage + microSD support. 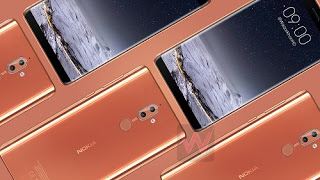 This Nokia 9 may likely be unveil before the end of 2017.
Source