Skip to content
Yea! It’s another Techy Thursday… How much of your Android
do you know? Let’s talk about Cast screen and how you can use it.
What is Cast screen?
It is a technology that allows a person to display whatever
is visible on his/her device’s screen on another screen, mostly wirelessly
using WiFi as a medium for sharing the screen.
Screen cast varies with different companies-Intel has their
proprietary Intel Wireless Display (WiDi) for Laptops, Apple has its own
AirPlay protocol, and there is indeed an open standard too-Miracast, which is
what any Android/Windows Phone with the “cast screen” button
utilizes.
How Does it Works?
1. Make sure you are connected to the same Wireless LAN/WiFi
network on both devices
2. Turn on the screen mirroring feature on the display you
want to cast to, the host display starts a program that acts as a
“server” to handle the exchange of screen casting data. If there are
more devices connected to that Wireless network, they’ll equally be display.
3. Press the “cast screen” button on your phone or
tablet, and it will try to identify all devices that are on the same Wifi/WLAN
network and are running a screencast server on their system. 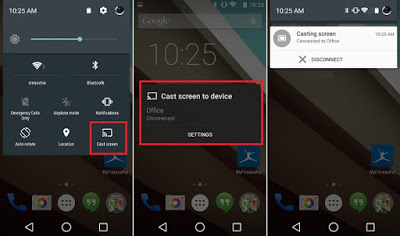 3. Now once both the device and the display have been connected,
a cast screen connection will be initiated. The device uses programs to record
its own screen and sounds and encodes them into the H.264 video format, which
can be streamed or sent to a display immediately at the same time as
recording-YouTube and almost every video website uses H.264 to serve videos to
mobile devices.
Think of your phone casting the screen as a live video
transmitter and your display as a live broadcast video player. Since our
transmitting device and our receiving player are on the Wireless Local Area
Network part of your wifi connection and not the Internet, they are attached to
each other as if connected by physical cables-which makes the screen cast
process fast enough to display live images on both screens at the same time.
How to Mirror Your Android Device to TV
To Mirror your Android device to TV set, make sure your TV
set is Miracast supported. See more guide on how to do that here.
For Apple Users
If you use an Apple device, from your home screen swipe up
and you’ll see AirDrop/AirPlay which allow you to Mirror your device to Apple
TV box.  Do note there is only one way to
mirror your screen: if your display is attached to an Apple TV box.
YouTube TV (http://tv.youtube.com)
is a specially designed YouTube website which allows phones or tabs with the
YouTube app to remotely link together.
This is the ABC of understanding how your Android Mirroring
works.