Skip to content
Nokia 6 actually gave a lot of fans in China today goosebumps, it went on on flash sales today and as was expected, it was sold out in
just one minute. I’m guessing Nokia 6 will be one of the hottest selling mobile phone
of 2017 because right now, over 130 million people have already registered
showing their intention to have in possession Nokia 6 which cost about $245. 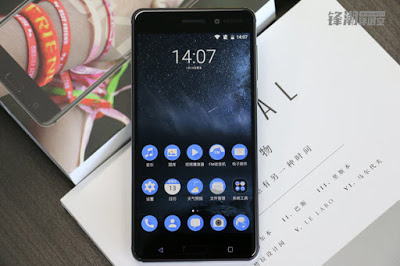 As we hinted earlier, the configuration of this monster
device Nokia 6 sports a 5.5-inch display with 1080 pixels resolution. It
is fired up by a Snapdragon 430 chipset which is backed by a huge 4GB
of RAM. There is also 64GB of storage onboard with the option of
expanding it further via microSD. On the camera end, the device packs a
16MP rear camera with a single LED flash lying just underneath it, as well as
an 8MP front-facing camera for sleek selfies.
3000mAh battery, Android 7.0 Naugat out of the box and
FingerPrint recognition ID located at the bottom of the dual speaker.
Via (anzhuo)