Skip to content
Good morning guys, I guess you are still testing the TStv
test transmission most especially those that received the free decoder. However,
you don’t need to receive the free decoder before you test the free to air
channels from TStv.
A lot of people replies about the test transmission has been
positive however, if you also want to test the transmission in your location,
you don’t need the decoder, but if your TV has an inbuilt decoder or you have
Strong, Qsat, Dsat, HD decoders or any other decoders that has free to air
channels, scan and track ABS 3A and you will receive TSTV on Freq: 11052, (V),
S/R: 30,000 free to air.
However, something ridiculous happened yesterday, 29 seconds
to the commencement of arsenal vs zve match, a message appeared on our
screen stating the followings;
“CA Error! YOU ARE
VIEWING BEIN SPORTS CONTENT ILLEGALLY VIA TSTV IN NIGERIA” 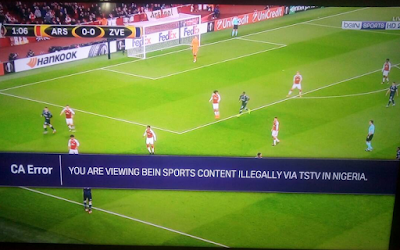 And immediately after this, the screen went blank and there was another
message that stayed for a while before TSTV wiped it out. The second message
read thus:

TStv took to their twitter page to announce that their system was hacked
that it will be fixed. I don’t know who is deceiving who or who actually hacked
who’s system but what I’m concern about is let their be real sport channels on TStv decoder and the 20GB free data must not miss.

In all, I stand with TStv Africa… DSTV rip-ff on Nigerians is just too much.
TStv should find a way to sort this out very fast.
Let us know what you think about the free to air channels you’ve tested so
far.