Skip to content
Technology is crazier when you eventually see the future of
technology… But this is what Samsung is currently planning for the
future.
Samsung uses curved display technology in phones like the Galaxy S8. Now it’s trying to figure out how it’s going
to use that technology to completely change the way smartphones look in the
future.
According to a new discovery by LetsGoDigital reveals Samsung several ideas for the future smartphone
designs featuring a display that wraps around both the front and back of a
handset.
The patent was registered with WIPO and it includes three different
concepts, all have a display on the rear side of the device.
Here’s some of what Samsung may have in store for future
smartphones.
A
display that wraps around the right side of the smartphone 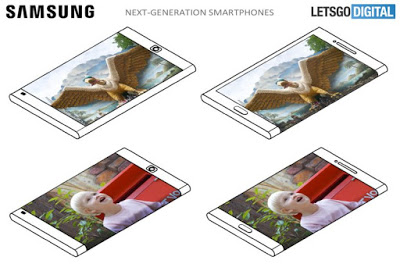 The first design shows a smartphone with one continuous
display that wraps all the way around the right side of the handset, giving it
the look of having two displays on the front and back of the device. This would
allow users to have two options for viewing on the device.
this model can switch viewing positions from front to back
depending on how the user is holding the handset. Imagine such a device that
would allow multiple users to view the same content from either side of a
handset at the same time, rather than huddling around one screen. 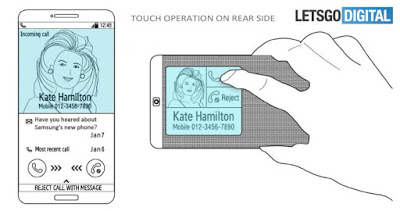 The second design shows a screen that wraps around the full
body of a device, but it includes sensors that account for where a user may
hold the device. 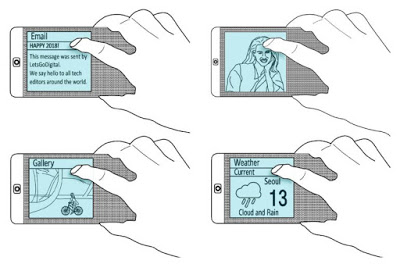 This design would allow the content to flip between the
front and back screens but will shrink the display away from the user’s hand
depending on how they are holding the device.

Display curves under the bottom of the
smartphone

The third model also shows a touchscreen that runs all the
way to the back of the device, but this time via the bottom, instead of the
side.