Skip to content
Nokia made its second appearance at the MWC 2018 after
its first appearance since HMD took over the reins last year at MWC 2017. And
they sure left a mark. Nokia brought to the table 4 new smartphones, none of
them disappointing. From flagships to resurrection of an old phone, Nokia
didn’t leave any stone unturned.
At the just concluded MWC, Nokia managed to collect several
awards, more than two dozens by our count, during the 4-day event. Nokia’s CEO
put the number of awards at 21. In a survey published by Brandwatch in
partnership with Twitter, Nokia has turned out to be the most mentioned brand
at the MWC 2018. Despite the presence of heavyweights such as Samsung, Apple,
Google and Huawei. 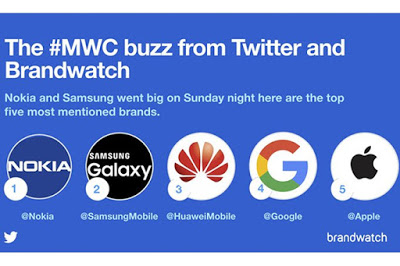 The survey showed that Nokia was number 1 most mentioned
brand, followed by Samsung at the second position and then Huawei, Google and
Apple in that order.
The gap that Nokia has bridged as a smartphone manufacturer
from its failed line of phones to the now most talked about handsets is
impressive.
The company launched 4 new smartphones, the Nokia 8 Sirocco
Edition, Nokia 7 Plus, Nokia 6 2018, and the Nokia 8110 4G aka banana phone.
Nokia has done a great job with the new line of phones. We are expecting to see
more from Nokia this year.
Source

16 thoughts on “Survery: Nokia was the Most Mentioned Brand at MWC 2018”