If you have an account on Twitter, the company is asking you to consider changing your password. A bug – which the company says has now been fixed, and wasn’t misused – prompted the company to issue this advisory.

The company says due to the bug, passwords were written to an internal log before completing the hashing process. Twitter says they spotted the bug themselves (presumably before anyone else did) and fixed everything. 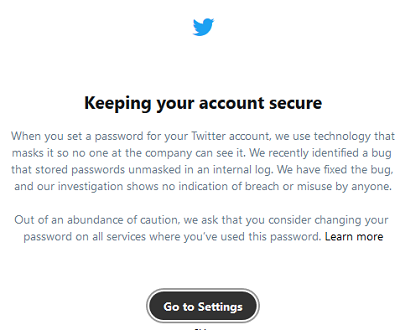 In order for this bug not to happen again, the company is implementing plans to prevent it from re-occurrence. So go straight to your account>>Settings and change your password before hijackers take it away from you.