Everybody loves London used phones because they are cheap and in most cases, they offer you all the features you’ll get in a brand new phone.

People who cannot afford a brand new smartphone opt in for a London use phones because it afford them the opportunity to use the latest device in the market. Someone have once asked me “why waste money on a brand new phone, when you can get a fairly use Samsung Galaxy Edge”? 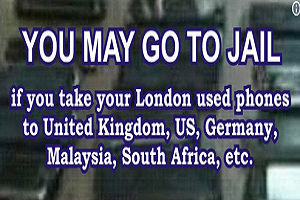 For the fact that they are London use phones and cheap doesn’t mean they are all good. In many cases, these phones have been reported stolen in other countries. A report released by The Sun UK in April revealed that the growing number of smartphone thefts in the UK is linked to the London-used phone boom in Nigeria — Lagos especially.

A gang of robbers is reported to be going around snatching smartphones ( mostly iPhones) from pedestrians on the streets of the UK. In 2017 alone, there were reportedly 16,158 phone crimes linked to the gang.

These phones are then shipped to Nigeria and most of them end up in Computer Village as London use phones.

RRS Commander took to twitter days ago to announced that London use Phones will land you in Jail if you take it to UK, US, Germany, South Africa etc because they have been flagged off as #stolen, #robbed or been used for #fraud. 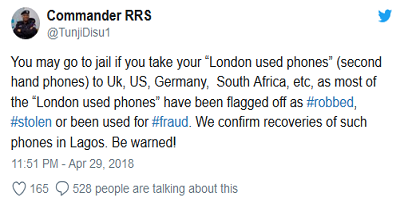 There’s no law against buying London-used phones in Nigeria but taking these phones outside Nigeria could land you in jail.