Skip to content
For the past few days we’ve been speed testing 4G LTE
network on our devices while codedly watching Etislat 4G LTE in ghost mode and
wondering when it will come out of it. Earlier yesterday, users in some major
cities reported seeing Etisalat 4G LTE active and live on their devices. See
below the speed test; 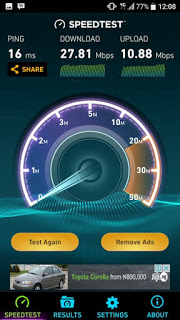 The good news is that Etisalat 4G LTE is now Live in Lagos,
I’m still waiting for other cities to confirm if its live in their locations or
not. Etisalat sims are automatically USIM(Universal Subscriber Identity Module) which doesn’t need sim upgrade before
it will work on 4G unlike its counterpart Glo and MTN  where you’ll have to
upgrade to 4G SIM.
Another good news is
that, most 4G smartphones will supports Etisalat 4G LTE Network because it’s on
a popular band. This is why I know that Glo 4G LTE is on a lonely planet; band
28 is forbidden on most 4G devices. 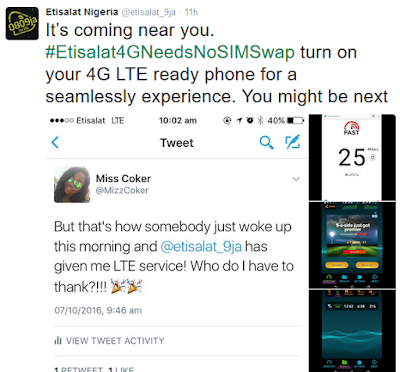 Etisalat has publicly announced this on their twitter handle… If I were you, I’ll just turn on my 4G network and scan for it. Those
of you still using 3G phones, you are on a lonely planet with Glo Mobile.
#Remember, Etisalat 4GNeedNoSimSwap.

7 thoughts on “Etisalat 4G LTE Now Live, Check if Yours is Active”