Skip to content
Good news for those who are eagerly waiting for Nokia’sAndroid smartphone, this is an evidence that Nokia Mobile is fully set to
bounce back into the mobile market. Since last year, Nokia has been rumored to
be working on an Android phone with images as seen here.
The good news is, Nokia DIC was sported at Antutu last week
and it clearly shows that it is a mid-range smartphone. 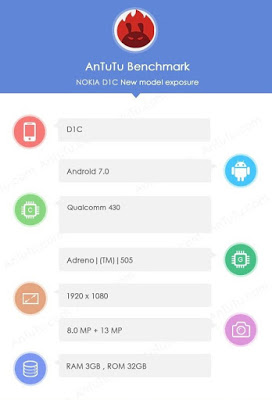 Nokia DIC Spec
The benchmark suggests the Nokia DIC runs on Android 7.0 nougat
out of the box, powered by an octa-core Qualcomm Snapdragon
430 processor clocked at 1.4GHz running on Adreno 505 GPU. It will have 3GB of RAM and 32GB internal storage with a microSD expansion slot.
The camera specs on Nokia D1C will boast a superb 13-megapixel rear camera coupled
with an 8MP shooter on the front for
selfies.  The Nokia D1C will
come with a display of 1920 x 1080 pixels.
This is the right time for Nokia to push the right button
considering the facts that Samsung has been having issues with Galaxy note 7,
HTC and LG are no where to be found.
Nokia, it‘s up to you.