Skip to content
You’ll recall that sometimes in February this year, Telcos threatens to block OTT Plays like Skype, Whatsapp, Wechat, Facebook, Viber and
IMO because of revenue losses from international calls  and are scared they “may lose  between N20tn and N30tn, or so, by the
end of 2018”, hence by blocking subscribers from accessing Skype and
other Over-the-Top services like WhatsApp, they may be able to recover their losses.
Telcos are lamenting again and urge NCC to do something… OTT operations have created a global revenue
loss of $386 billion for the telecoms operators from 2012 to 2018, adding that
they were also endangering their network development. 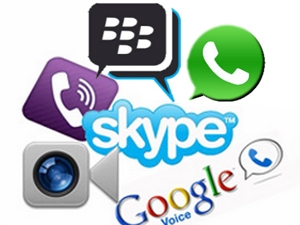 They claim that OTT platforms utilize traditional Mobile
Network Operator (MNO) infrastructure to drive huge advertising revenues; and
therefore urge NCC to do something (By either blocking or or placing
restriction)about it.
After-all, is it not their data we are using to make international
video calls, via WhatsApp, IMO or Skype? Why are they complaining? You too
think of it, 1GB data of 2013 is not the same with 1GB data of 2017; because
1GB data of these days zaps faster than that of 2013.
Telcos should just be creative and do something that will
lure subscribers away from OTT Players said
NCC.
via