Skip to content
Although the company just launched its full-screen
smartphones S8 and S8 Pro,  but this
doesn’t stop them from launching another new products.   According to the latest news, LEAGOO’s will
be launching a new product called “LEAGOO T5c” – a budget version of the
previously launched LEAGOO T5.
T5c inherits the all-metal unibody and flawless designs from
T5 and is more affordable than its predecessor!      LEAGOO T5c is rumored to be equipped with
1.8Ghz 8-core CPU, SAMSUNG 13.0MP + OV 2.0MP rear dual camera and 5.5” SHARP
FHD IPS display. 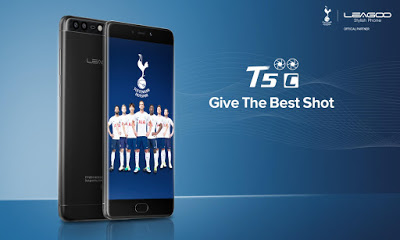 It has a storage of
3GB RAM + 32GB ROM, which is a little behind T5, coming with LG 3000mAh battery
with 5V2A  quick charge.
The good news is that
the front fingerprint ID is reserved for its convenient usage.      As a mid-range smartphone, LEAGOO T5c has
the best price for its great performance and specs. You can seldom find any
problem regarding its design or specifications. The retail price for T5c is
estimated to be $129.99!
As the new generation
of budget killer, T5c is predicted for mass production and shipment on 5th of
December! Guess the pre-sale of T5c is coming soon.