Skip to content
According to earlier reports, the
operations of DSTV and GOtv would come to an end in 2019 as their license which
expires in June 2019 would not be renewed.
The license issued to MultiChoice in
2014 is not reportedly in line with the Digital Switch Over (DSO) White
Paper and that’s why it wouldn’t be renewed.
In an exclusive statement,
MultiChoice says it complies with the regulatory requirements and applicable
laws on TV broadcasting. 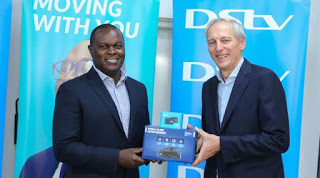 “GOtv is provided under a fully
licenced and registered entity in Nigeria, and this license comes up for
renewal in March 2019″ the
statement reads.
“As a law-abiding and committed
Nigerian operator which has fulfilled (and continues to comply with) all
regulatory requirements and applicable laws, it is not clear how or why this
license would not be renewed, and as such the company will investigate further
in the best interests of the many customers it serves in the market” it further says.
The statement adds that “MultiChoice
remains committed to providing its customers with a wide variety of quality
entertainment through the usual best standards.”
MultiChoice entered into the Nigerian space in 1994.
In 1995 it launched DSTV (Digital Satellite Television), a direct
broadcast satellite service for the Sub-Saharan African market.
In 2011 MultiChoice launched the GOtv digital platform, a pay television offering on digital terrestrial television (DTT).

20 thoughts on “MultiChoice, DStv/Gotv React to Operations Shut Down in 2019”