You’d think Facebook would be faster at copying itself. Five years after Facebook Messenger took a cue from WhatsApp and Voxer to launch voice messaging, voice messaging is now rolling out globally to Instagram users.

The feature allows users to send each other audio messages up to one minute long in private and group chats. The update is rolling out now for iOS and Android. 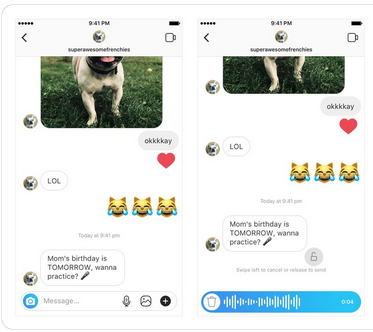 Users with the feature can record messages by holding down the microphone button. It’ll send automatically when you release the button, so if you don’t feel confident about sending it or want to re-record, you can slide your finger over to the trash can button to delete it.

Even though Instagram is a little late to the game with bringing voice messages to DMs, It will have to compete with Viber, Telegram, Facebook Messenger and WhatsApp for the use case.

Instagram Voice messaging may be a welcome development to some users who preferred to send voice messages rather than typing in DMs, as voice messaging are quickly becoming the preferred method of communications on platforms like WhatsApp and Facebook.