This news has been going round since last month but the heat is getting
deeper on social media. Protest has been going on in Enugu, Lagos and some
other states.

Telecoms giant Globacom Ltd, popularly referred to as Glo, has
been accused of mass-sacking members of staff who are female and married.

The former staff members have
alleged that although a few men and single ladies were also let go, married
women were the most affected. As we are speaking, legal action is being taken
against glo to ensure they are compensated for the alleged
discrimination.
An unverified document shared by Twitter user @duchesskk showed that of 97 women sacked by Glo, only
4 were single, while the rest were married. See the documents here. 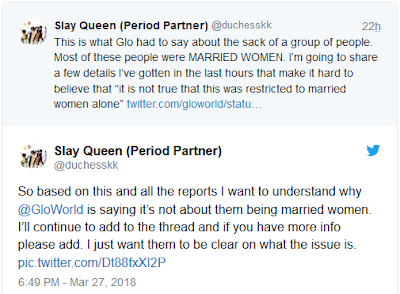 However, some affected former member of staffs granted TVC
Lets talk interviewed, that they were told that their services are no longer
required. Watch the interview here
Glo has refuted the claims that
married women were targeted in the mass sack.
In a statement released on its
Twitter, the company said both male and female, single and married, were let
go. It wrote: 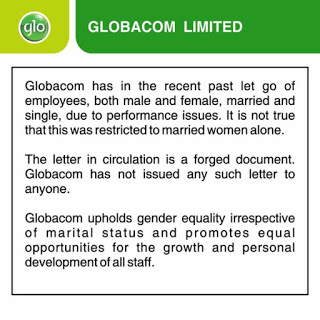 Globacom has in the
recent past let go of employees, both male and female, married and single, due
to performance issues. It is not true that this was restricted to married women
alone.
Do you know any one that is affected by this sack?