The popular instant messenger WhatsApp currently has a bug that allows Android, iPhone and Windows Phone users to recover deleted messages from friends.

Its no longer news that WhatsApp allows users to delete messages sent by mistake some time ago. But the rules around removing messages are fairly restrictive. 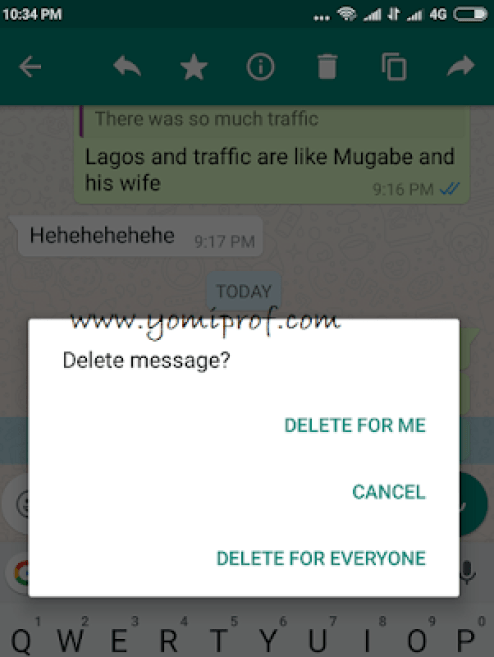 You can only delete messages for one hour after they are sent, for example. Something that was implemented to prevent people from deleting whole message histories.

There is, however, an apparent workaround that restores deleted messages in very limited circumstances.

Here is the catch;

How to Recover Deleted Message on WhatsApp

It revolves around WhatsApp backup feature that runs on most people’s phones at 2am each night. Other backup options are available, but it’s the overnight one that makes the most sense to exploit this bug.

==>If someone deletes a message and you want to read it then you simply uninstall the app and then install it again. When you do this the chat archive will be restored from the backup and deleted messages will reappear.

==>It seems that there’s an issue with how the app handles deleted messages that makes this possible. When you’re online and someone deletes a message the app says “this message was deleted”.

==>While the message vanishes from the chat it’s still stored on the device. When the backup is restored the app no longer flags it as deleted and it’s restored.

There’s are risks with restoring backups though and they can cause problems of their own. You will, for example, lose messages that were sent between the backup and when you reset your phone.

Like I said, this a bug and it won’t last forever. WhatsApp may soon roll out a fix for it but for now, you can use it while it last.