According to the latest reports from a popular research firm IDC, Xiaomi is now the Fourth largest smartphone manufacturer in the world.

According to the report, smartphone sales declined globally in 2018. However, manufacturers like Huawei, Xiaomi and OPPO managed to increase their shipments. 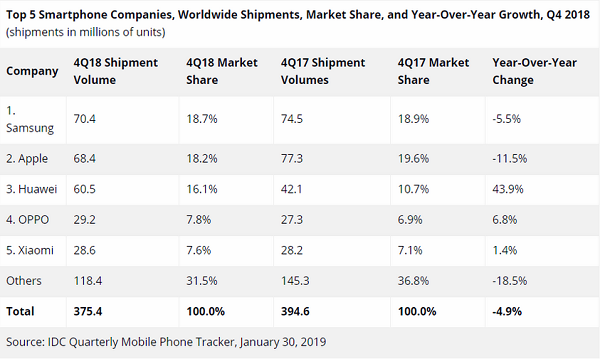 Samsung topping the list, for the first quarter shipped 70.4 million units to grab a market share of 18.7%. With a barrage of 5G smartphones right around the corner, it will be interesting to see if Samsung has enough in the tank to weather the competitive environment and maintain the top spot in the market.

Huawei Shipped 60.5 million units – an increase of 18.4 million units from the preceding year. With a market share increase from 10.7% to 16.1%. Claiming the 3rd position.

OPPO and Xiaomi close the top five list with 29.2 million units and 28.6 million units shipped respectively. And both grew their market share too last quarter.

Xiaomi ranked as 4th largest smartphone company in the world according to latest IDC report. Full-year shipments up 32.2% YOY and total volume surpassing the 100 million mark. Thank you Mi fans for your support! #NoMiWithoutYou