Skip to content
Personally, yomiprof.net doesn’t know how this will feel
because I already made use of the Whatsapp calling features and it seems to be
getting better every now and then considering the fact that not every body
makes use of Skype Video calling… but there are more people who uses WhatsApp
chat but not the call.
What if the next update that will be rolling out to
Blackberry and Android comes with Video Calling… will you love it? Well, a
German blog Macerkopf.de has leaked screenshots of the WhatsApp video calling
feature from private beta versions of the iPhone version of the app.
Screenshots of the video calling feature show that users will be able to turn
off the mic as well as flip the camera. 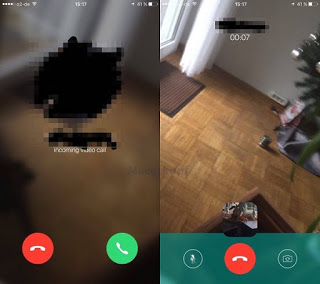 The layout of video calls shows two
windows, one each for the caller and the person who has received the call.
So iOS users, braise up and warm up because the next
WhatsApp update that will be rolling into your device come 2016 might carry the
video calling features.
Will you love this video calling features?

11 thoughts on “Get Set to Welcome WhatsApp Video Calling”