One of the greatest disaster of every mobile phone is having issues with your battery draining unconditionally without your permission. It’s not only annoying but disturbing. It’s a total crab having your devices working perfectly while your battery don’t last at all.

If you are in such predicament, you charge your smartphone, as soon as it gets to 50%, it will quickly reduce to 20%, and before you know it, your smartphone is hot and switched off. Then their is a fix for you.

I know this battery issue drain is common with most smartphone and some few others but just read on.This is just a simple fix for those experiencing the draining stuff.

Advance Task Killer (ATK) is often use to kill applications and clean memory.

How to use it (for new users to quick start)?

ATK is pretty simple. Open this tool and take a look at the running applications list? Uncheck some apps you don’t want to kill (such as Advanced Task Killer and some system apps) Tap the button ‘Kill selected apps’, it will kill all applications checked. 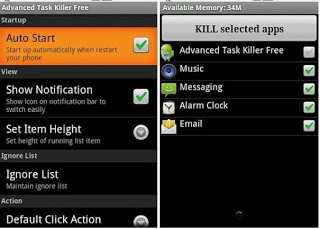 Ignore list is for you to ignore some app you don’t want to kill. If you long press on the app listed on the main screen of ATK, the menu will pop up, then you can select ‘Ignore’, the application would be moved to ignore list. When you tap ‘Kill selected apps’, it won’t be killed any more.

What is Auto Kill?

– Crazy: All apps except for apps you are using with. 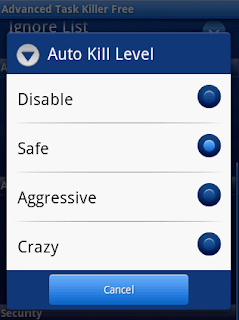 This application is pretty much handy and will help you save your battery usage regardless of the kind of phone you are using.