Skip to content
The year is still unfolding and many more things are still
going to happen. I guess you remember your beloveth Visa fone, the Nigeria’s
last standing CDMA operator, who won’t hesitate to give you 10 terrabytes ofblackberry data for just N1,000 is now dead as it has been acquired by MTN
Nigeria.
Lots of things has been going underground and according to
info spreading across, Visafone staffs has been retrenched or lay off, and MTN
is set to work on converting existing infrastructure and software to support 4G
LTE in Nigeria. 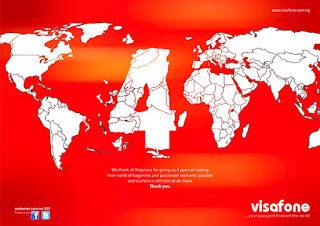 Meaning with or without the unfulfilling promises of ntel,
later in the future MTN NG will bring you 4G LTE just like they did in
Cameroon.
Those of you who are conversant with this story earlier on,
you’ll remember that Visafone’s CDMA licence covers a frequency band that is
hot for LTE operations.
The hour has come to liberate the world from the oppression
of 3G network, through the introduction of 4G LTE, and I’m sending MTN to pioneer
this transformation agender even though they are still wearing the same boxers
with NCC.
This is why I know that those of you still buying and using
smartphones that doesn’t support 4G will soon throw it away.
What do you think?