Skip to content
Disaster is what happens when godless begins to attack the
god of OS “Android”. Often times, Android operating system has been vulnerable
to malware attacks but always find a way out. Another malware called Godless has
been discovered by Researchers at Trend Micro which targets devices running Android
Lollipop or earlier.
6 Facts You Must Know About Godless!
1. Godless is a deadly malware that repeatedly download
unwanted apps  and silently install them,
and often display malicious ads.
2. Godless uses a framework called
“android-rooting-tools” to gain root access to Android-based devices.
3. Godless has already infected over 850,000 devices
worldwide, bad actors delivered it through malicious applications deployed in
legitimate app stores, including Google Play.
4. Godless also installs back-doors and spy on users
5. Even if your Android device is not rooted, Godless will
root it for you without you knowing
6. Numerous applications on Google Play store were found to
be containing malicious code affiliated to Godless. 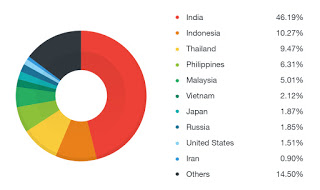 How Can I Avoid Godless Malware?
>>To stay protected, always review the developer
when downloading an application, and should be wary of unknown developers with
very little or no background information, as they could be the source of
malicious apps.
>>Download apps from trusted stores.
Beware of Godless!

11 thoughts on “Beware of Godless! It Will Completely Destroy Your Android Smartphone”