Skip to content
Despite the
fact that you just switched from Blackberry 10 to Android or iOS, Blackberry
still loves you. They’ve just announced the launch of their  BlackBerry Hub+ suite of Android apps, which
will be made available with a new software licensing program for mobile
devices.
According to
Blackberry, … we’re bringing the super productivity suite known as BlackBerry
Hub+ from BlackBerry 10 to, not just PRIV  or our coming DTEK50
smartphone, but ALL Android M(arshmallow) smartphones. 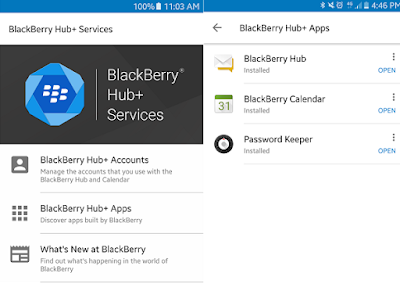 BlackBerry
Hub+ for Android is a new suite of apps that should be familiar to any
BlackBerry 10 user. It helps centralize all of
your communications into a single, unified interface. The BlackBerry Hub
inbox is included in this app bundle, which also includes a calendar, password
keeper, contacts. notes, a launcher and more.
For now, it
is available for Android 6.0 Marshmallow… It will be available for Android
Lollipop and iOS devices later in the future.
Where Can I
Download it?
You can
download a free trial of Android Hub for Android from Google Play. After a
30-day trial, you can continue using the apps for free with an ad-based
experience, or subscribe to the entire suite of apps for 99 cents  a month,
which will include additional features: contacts, tasks, device search, notes
and launcher.
Download it here
More to come…