Skip to content
Lately, it’s as if the forces of darkness have possessed the
Samsung Galaxy Note 7, making it catch fire and burn someone’s skin or property
with it. Just few days ago again, it exploded in the hands of an innocent 6
year old boy watching video on his Samsung Galaxy Note 7. 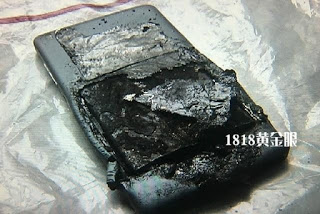 I don’t know what Samsung did wrong that makes evil forces
to descend on them, and their share fell by atleast 7.2%  lately. The same forces of darkness has appear
to have taken an unfortunate look on a Xiaomi Mi 4C (Though it is believed to
be a faulty unit) as it exploded in the back pocket of its user and gave him
third-degree burns on his hips.
The accident has been caught by a security camera and the
aftermath photographed inside what’s presumably a hospital.
Let’s hope the dark forces take a chill pill, ease the grip
on smartphone batteries that they’ve had lately. We don’t want any more phone
accident.
See the uncensored photo here

7 thoughts on “Xiaomi Mi 4C Exploded in Users Pocket, and Burn’t off His “bum-bum””