Skip to content
This
is an interesting tale of how the mighty has fallen… It reminds me of the first deadly blow Blackberry received from WhatsApp, that kept it unbalance
and as a result extensively affected their market share and caused Blackberry
to bow to pressure by producing her first Android powered device in 2015
called Priv.
Blackberry
Priv failed the company in every aspect. In November 2016, Etisalat discontinued supports for Blackberry service . Dec 17th 2016, Glo followed suite…
While we are still trying to find an alternative way for Blackberry users to
install WhatsApp on their device, MTN released their condolence prayers to all
Blackbery users today; 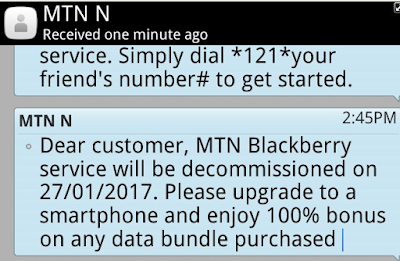 “Dear
customer, MTN Blackberry service will be decommissioned on 27/01/2017. Please
upgrade to a smartphone and enjoy 100% bonus on any data bundle purchased”
Meaning
goodbye to BIS and BBC subscription on all Blackberry OS7. If you are still
using it, you will no longer be able to access internet on that phone again. It
is time to upgrade to a smartphone.

17 thoughts on “MTN to Discontinues Support For Blackberry Services”