Skip to content
A new, purported, Xiaomi Redmi Pro 2 model has shown up
online, still in the leakage zone but a better value for your money.
The Redmi Pro was an experiment by Xiaomi – it used a
China-made OLED display and a dual-camera. Now its successor is on the horizon
and a screen snap that shows its specs. 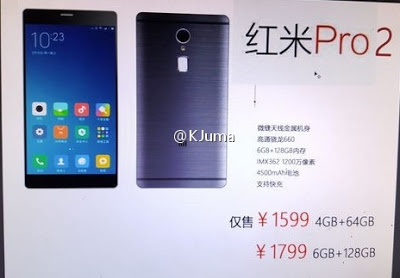 The alleged specifications for the Xiaomi Redmi Pro 2 reveal
two variants of the phone – a premium one with 6GB of RAM and 128GB of internal
storage, and a cheaper version with 4GB of RAM and 64GB of storage.
Unlike last year’s dual-cam
Redmi Pro, this phone features only one camera on the back – a 12MP shooter
with a Sony IMX362  1/2.55” sensor and a
1.4µm pixel with Dual Pixel autofocus at its core. The Redmi Pro 2 will allegedly sport the same full HD 5.5-inch,
Chinese-made OLED display as its predecessor.
The Redmi Pro 2 sport
a Snapdragon 66x chipset, unlike the both version of Redmi Pro powered
by Mediatek; It comes with 4500mAh battery capacity.
Price: The pricing for 4GB RAM/64GB storage will go for
roughly around $230, while the premium variant with 6GB RAM/128GB storage will
be priced at $260.
Via GSMArena