Skip to content
It seems the grandmaster of data Glo the unbeatable when it
comes to data and price stylishly heard our cry from Baba glo slow to baba
speed up. We once lamented that glo has the cheapest data plan in Nigeria at the
same time the slowest network… but now the table has turned and the honeymoon
just began for glo users in Nigeria.

The network has been pretty amazing and fast in my location,
and I can bet some of you can attest to it that glo network has undergone some series
of improvement within the last few weeks. Maybe they simply suspend the dopemu
that was in charge before with a replacement of kuchikuchi. 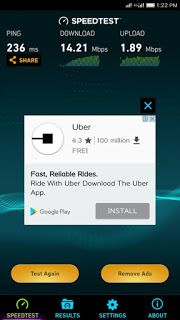 Getting an average download speed of  1MB/s – 1.5MB/s isn’t bad at all. If Airtel NG
breaks your heart, simply switch to glo Network. Their data is cheap and in
terms of speed, it has undergone some improvements. Test it and let’s hear your
feedback.
How is Glo internet connection in your area to those of you
using it?

31 thoughts on “How is Glo Network Speed in Your Location?”