Skip to content
Gionee is warming up to unveil its newest smartphone in the
M series  Gionee M7 in china soon. It
said that the phone will have full screen display with ultra-narrow bezels,
similar to its teaser.
The company has officially teased a promotional poster of
upcoming Gionee M7 which shows the device with no bezels at sides while very
thin bezels at the top & bottom just like the other full-screen devices.The
teaser talks about collaboration with bicycle company Ofo for “doing things”
and comes with a tagline of  “M7 Joint card invites you to see the world
in full screen”, clearly indicating that the phone is designed with full-screen
as confirmed by the phone image in the teaser too. 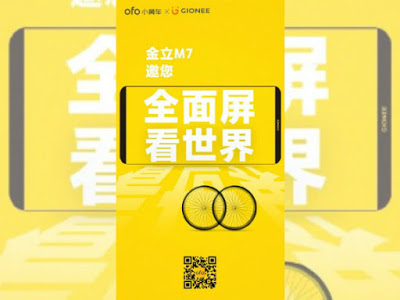