As for specifications, the Galaxy J7+ runs on Android 7.1.1
Nougat out-of-the-box, and come with some new features such as dual apps, where
you can create two instances of a single app. It sports a 5.5-inch full-HD
(1080×1920 pixels) Super AMOLED display, and is powered by a 2.4GHz Helio P20
octa-core processor paired with 4GB of RAM. Internal storage is at 32GB with
the option to expand further using a microSD slot (up to 256GB). 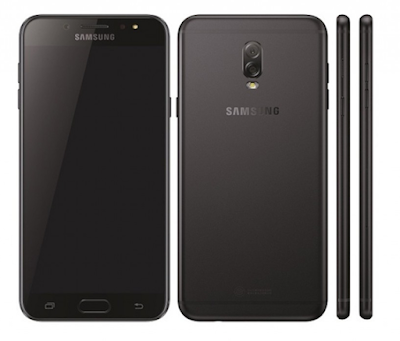 The smartphone is backed by a decent 3600mAh battery. Coming
to the cameras, the J7+ two cameras of 13MP and 5MP at the back. Both the cameras
work in tandem to produce bokeh effect in the images. Up front, Samsung has
added a 16MP selfie camera with a f/1.9 aperture and LED flash support.
Other features include multi-window support, dual app
feature (two WhatsApp accounts can run simultaneously), always-on display for
important notifications, and a secure folder to keep your apps and files
private from privy eyes.
Key specifications
Display: 5.5inch
Resolution: 1080×1920 pixels
Processor: 2.4GHz octa-core
Storage: 32GB
Camera: rear 13-megapixel +5MP; Front 16MP
Battery Capacity: 3600mAh
It is up for pre-order and the price is around $390. Via