Skip to content
You probably must have heard of Android instant apps…
Android instant apps lets users access apps from search, social media,
messaging, and other deep links without the need to stop and first install the
app.
Android instant apps was announced at Google I/O sometimes
in May last year and now Instant Apps are finally making their way to users on
the Google Play store listings through a Try It Now button. Instant Apps launch
with just a tap on a URL. To support this, developers partition their apps into
small, runnable parts, so they can start within seconds. 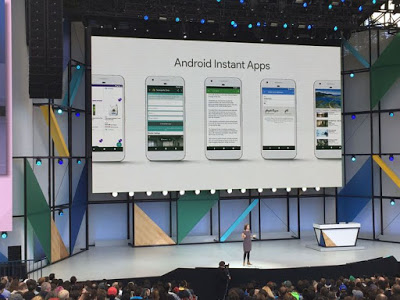 With the current integration, users will be able to run
Android apps instantly without requiring installation. Here are the lists of featured instant apps… The list includes BuzzFeed, NYTimes (Crossword), Hollar,
Red Bull, Skyscanner, Onefootball Live Soccer Scores – these can now be tried
out by users before actually downloading them.
Google also announced a revamped Editors’ Choice tab in
Play store which is now live in 17 countries. Some of the upcoming changes
include improved home section for games which will soon feature trailers and
screenshots of gameplay and two new browse destinations are also coming soon
namely ‘New’ (for upcoming and trending games) and ‘Premium’ (for paid games).
And finally, Google also introduce Google Play Security
Reward Program.The program will allow Google to find vulnerabilities and notify
developers via security recommendations on how to fix them.
Via: 1
source: