Skip to content
Gionee will be launching series of smartphones on 26th of
November featuring a benzel-less Display. Gionee will be launching Gionee F205
and Gionee F6 smartphones along with Gionee M7 Plus, S11, S11S and Steel 3.
Chinese Micro-bloging site Weibo shared some teaser images
of the expected devices but doesn’t reveal the phone specifications but Gionee F6
and F205 will feature a full-screen display with minimal bezels and an aspect
ratio of 18:9.
Earlier Rumors
Gionee F6 and F205 were spotted on TENNA and GFXBench with
the following specification – Gionee F205 is expected to come with a 5-inch HD+
display. It will feature an 18:9 aspect ratio and will be powered by MediaTek
MT6739 chipset with quad-core CPU and 2GB of RAM and 16GB onboard storage. 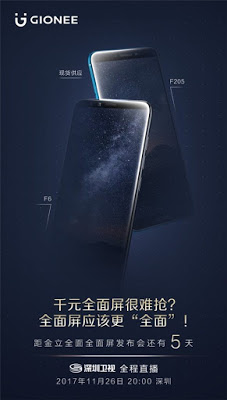 8-megapixel rear camera and 5-megapixel front camera. It is
said to be running on Android 7.1.1 Nougat operating system with the company’s
own custom Amigo UI on top.
Gionee F6 on the other hand will feature 5.7-inch with full
screen display, will feature a 5.7-inch HD+ display. Coming with MediaTek
MT6739 chipset,  1.4GHz CPU and up to 4GB
of RAM and 32GB onboard storage. It will run on Android 7.1.1 Nougat OS.
According to earlier leaks, it will feature a dual-camera
setup on the back (13MP+ 2MP)and single camera at the font 8-megapixel . The
smartphone will be fueled by a 2,970mAh battery.
Gionee M7 Plus was earlier spotted on TENNA revealing its metallic
built. It is expected to come with a 6.43-inch FullView display with screen
resolution of 2160 x 1080 pixels, 18:9 aspect ratio and a 2.5D curved glass on
top. 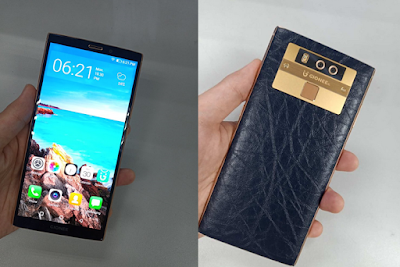 The device will be powered by a Qualcomm Snapdragon 660
processor, coupled with 6GB RAM and 64GB internal storage. As of the camera,
the device will come with two 16-megapixel lenses at the back and an
8-megapixel selfie camera. The phone will be running Android 7.1 Nougat ontop
Amigo OS 5.0.
Gionee S11 was sighted via an online advertisement from
Gionee few days ago coming with 4 cameras (16MP+8MP front camera and 16MP+5MP
back camera). The phone comes with a 5.99-inch full HD display, with 2.3GHz
octa-core MediaTek MT6763 processor, coupled with 6GB RAM and 64GB of storage. It
sill be powered by 3500mAh battery capacity

Gionee Steel 3:
Earlier leak rumors suggested that Gionee Steel 3 will feature
a 5.5-inch display with HD+ resolution, an octa-core processor with 2GB/3GB RAM
and 16GB/32GB storage. It is speculated to have 8MP cameras on the front and
rear and a 4,000 mAh battery.
We await the official launch to know the prices and other
technical information.
Source 1, 2