So yesterday, the European Commission had slapped the search giant with a record-breaking €4.3 billion ($5.04 billion) fine. The California-based company was found guilty of using its mobile OS to “cement its dominant position in general internet search.”

The EU’s ruling gives Google 90 days to change its practice or face even more severe penalties of up to 5% of its average daily revenue. 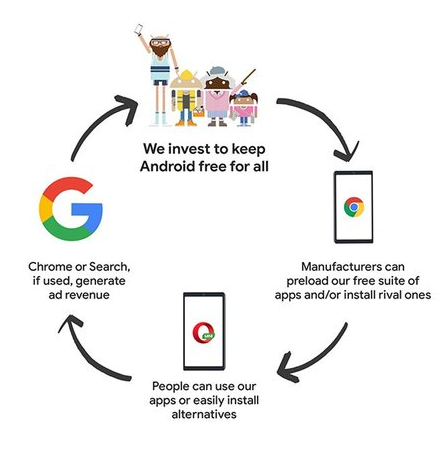 For the people left wondering how come Apple is allowed to highly restrict what is on their devices, the Commission explains that Apple doesn’t license its software to other manufacturers.

The conditions Google puts as part of the Android license agreement with phone makers is what the regulator considers illegal. More specifically:

Android May No Longer Be Free If The Decision Stand

In a statement, Google CEO Sundar Pichai suggested they may not be able to offer Android for free if the decision stands.

“So far, the Android business model has meant that we haven’t had to charge phone makers for our technology, or depend on a tightly-controlled distribution model,” said Pichai.

“If phone makers and mobile network operators couldn’t include our apps on their wide range of devices, it would upset the balance of the Android ecosystem.”

“Phone makers don’t have to include our services; and they’re also free to pre-install competing apps alongside ours. This means that we earn revenue only if our apps are installed, and if people choose to use our apps instead of the rival apps,” said Pichai.

Some phone makers, such as Samsung, have developed their own web browsers, but are still forced to bundle Google Chrome on their products. If the EU ruling comes into force, these companies would be able to free to push their own browsers as the default option and also change the default search engine.

Chrome and Google search are already so popular and widely-used, that even if such a ruling comes into force, the vast majority of the billions of people who are using them on a daily basis will continue to do so in the future.