Instagram Lite, the app launched by Facebook two years ago in several countries to help users with less powerful smartphones has been shutdown.

The app, Instagram Lite has been removed from the Google Play Store, while those who already have it installed on their device are now met with a message informing them that the app is no longer supported. 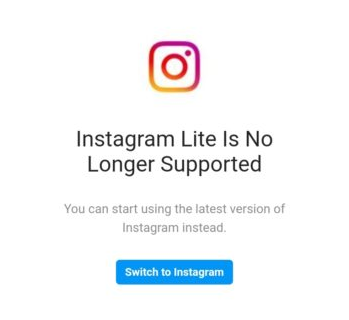 First trialed in Mexico around June 2018, before expanding to other regions at some points. Before it was shut down, the app garnered over a million downloads, updated last in October.

If you are using a low-end smartphone and unable to use the Instagram lite, it is advisable you download the full version or access Instagram via your browser. After all, a lot of lite apps are nothing more than a managed WebView browser with a few extra elements added.

We don’t know the reason behind shutting down the lite version of Instagram but it appears it is coming back but we don’t know when.