Skip to content
Scarcity of petroleum in many part of the country is seriously
affecting  so many businesses and I’m afraid,
most banks and some others has already issued a statement that they will be
closing up so early. GTB and Sterling has already issued a statement.
Not just
that but MTN, the highest subscriber base is also affected;  Airtel issued a statement over the weekend on
their twitter account and facebook account that they might be forced to shut
down operations if scarcity still looms.
Just this morning again, Etisalat issued a statement on their twitter page
that they might be force to shut down if it continues. It means that if
Etisalat, Mtn and Airtel shut down, you will be completely out of network reach
on your sim chip, you won’t be able to access the internet, make calls etc. 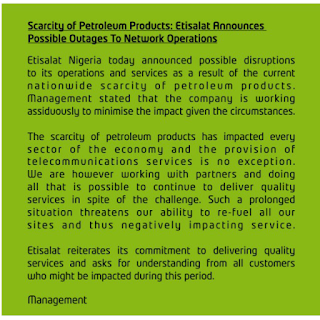 The worst aspect will be when  banks shut down, ATM might not work and if you
dare run out of cash, then you know whats up.
Which way forward people?

8 thoughts on “MTN, Airtel & Etisalat Shutting Down Operation Soon Due to Scarcity of Diesel”