Skip to content
Why are we even killing ourself over Tecno Phantom 5 premium
device? While Tecno and its entourage seats in their office and laugh in
chinese. Do you know that Tecno owns Infinix and iTel…
Here is an excerpt from  an article written March 4,2013 by Mr Mobility
of  Mobilityarena
… Tecno and Carlware
make up a conglomerate mobile brand called Infinix. The Infinix brand produces
and sells self-branded android smartphones… 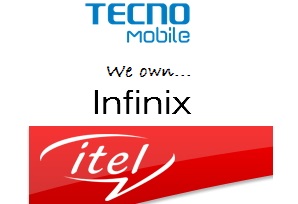 … It paid off for Tecno and more opportunities were even spotted.
Soon, there was speculation that Tecno had acquired a part of Mobiwire, a company
that is an offshoot of Sagetel (Sagem Mobile’s
Manufacturing plant). The company is today called Infinix Mobility, and the goal was simple. Tecno
was to service from Lower end up, while Infinix did Mid range down, taking up
two disparate markets. The Infinix name is in fact axiomatic to be more high
end.

If
you had checked TecnoTelecom.com
before it was redirected to Tecno-Mobile.com,
you’d have noticed a portfolio widget by the footer that included Infinix as one
of the brands owned by Tecno. So it is like the
Toyota-Lexus/Honda-Acura/Nissan-Infiniti plot. The later is the high end or
luxury version of the former.

This is just a game play. Tecno owns all
your infinix smartphones including your much appraised Hot2, iTel smartphones and Tablets. This is why they call
the Phantom 5 Premium device and they were never bothered about the price even
when Nigerians were ranting and chanting. Tecno  are big boys.
What’s your thought on
this?
Source: Mobilityarena,
Thebleet

20 thoughts on “TECNO Owns Infinix & iTel Devices, Why Are You Giving Yourself Unnecessary Headache?”