Skip to content
Some Android users have been bragging about the simplicity of Android OS over iOS but Apple want to prove you wrong. Apple recently updated some parts of its official website, which now includes a section dedicated to Android users who may want to switch to iOS.

Apple is trying to lure Android users to ditch their Android device into the dustbin and get a branded iPhone device. Apple is actually bragging about the fact that iPhones are very fast considering their custom chipsets, great cameras (iPhone 2MP camera out shine some Android 16MP camera px), offer enhanced privacy and security and generally, iOS is simple to use. 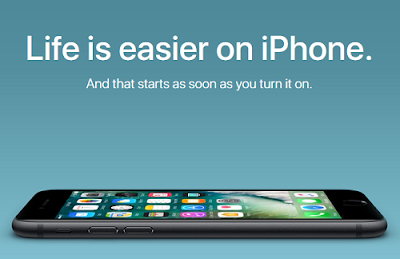 Apple mentioned that “Life is easier on iPhone. And that starts as soon as you turn it on.”  By scrolling down the page, you’ll discover several reasons why Apple thinks that switching to an iPhone is a good idea – starting with the fact that transferring your data (after downloading the dedicated Move to iOS app from Google Play) is easy as a breeze.
We can really say apple have advantage here because it’s also easy to transfer data from iOS to Android in seconds when you turn the table around.
Apple has uploaded a series of 16 sec short videos  on its Youtube channel here that underline the easiness of ditching your Android handset for an iPhone.
Are you planning to switch to an iPhone anytime soon? Let us know.